ASAÉS, a gastronomic and olfactory artistic concept, is a travelling and evolving cultural event created by the visual artist Claire Xuan. It has been produced in many countries such as France, Vietnam, Morocco, Japan, China, Laos.

Having Vietnamese origins Claire Xuan chose Hanoi, the land of her grandfather, for the preview of ASAÉS and the 20th anniversary of Éléments d’édition that has been publishing and releasing her work since 1999, birthdate of her first book-object: Vietnam and the five elements.

ASAÉS represents the five universally recognized tastes and flavours –Sour, Sweet, Bitter, Spicy and Salted- that are the main thread of this artistic project. The exhibition also brings to light and fragrances a selection of vegetable raw materials – flowers, fruits, aromatic herbs and plants, fragrant wood- used in cookery and perfumery as well as in ritual practices, more particularly those dedicating a great part to incense.

Both poetic and recreational, the exhibition also consists in interactive meetings with gustatory and olfactory experiences.

The French Institute in Hanoi houses ASAÉS from May 16th to June 30th and presents a collection of original and previously unpublished graphic compositions the artist created from her photographs. This collection is a tribute to silk scroll painting that has highly inspired her. Thanks to compositions of her own, Claire Xuan evokes the materials and textures, the construction and the presentation of these traditional Asian pictorial works. Her canvasses have been classified into two groups: horizontal panoramic compositions named PANASAÉS and vertical kakemono compositions named KAKEASAÉS.

Not only do the visitors travel through this visual experience but also through a sensorial and mainly olfactory one. After solving visual riddles by means of pareidolia –identifying known shapes in abstract compositions- the visitors can solve olfactory riddles guessing the fragrances contained in a collection of phials named ASAESSENCES and specially made from the vegetable materials presented. Therefore, ASAÉS appeals to the imagination, powers of observation and memory of audiences of all ages and cultural backgrounds.

In a small cabinet of curiosities is displayed a selection of the artist’s book-objects as well as fragrances by French luxury perfume houses containing some of the emblematic raw materials presented at the exhibition.

To open and lead the ballet of ASAÉS and its five flavours, a chef from Hanoi is here to share his experience and a new original recipe based on some of these specific ingredients. The visitors are thus given the opportunity to discover and taste many aspects of the natural and cultural heritage of various countries.

Furthermore, the artist organizes educational visits linked with the exhibition at the French Institute with the students from the lycée français Alexandre Yersin in Hanoi.

The ASAÉS book-object is in preparation to be released early in 2021. A crowdfunding will soon be started. 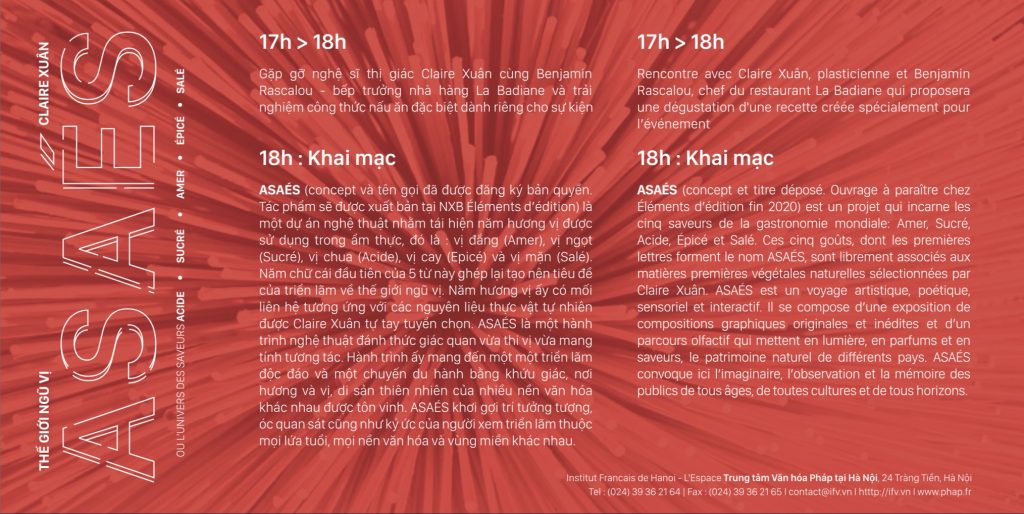